A Man At Arms by Steven Pressfield

Paul’s letter to Corinthians is at the heart of this action-packed and engaging historical fiction with a dark hero and intriguing characters. Plenty of action and historical detail. 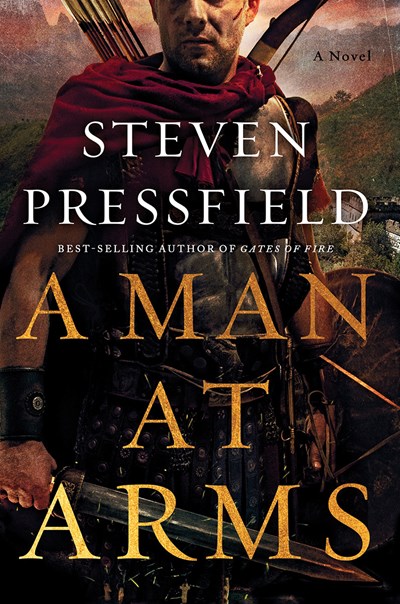 A Man at Arms by Steven Pressfield

If your literary diet lately has been deficient in blood and thunder leaving you wan and suffering from ennui, an anodyne is at hand. From the pen of Steven Pressfield, author of historical fiction with a bite comes this story of the formative days of the Christian faith with the attendant death, destruction, betrayal and intrigue appropriate to such a tempestuous time.

Telamon, a taciturn former Roman soldier and officer aids a merchant caravan attacked by thieves and takes under his wing a young street urchin who attaches himself to the mercenary and becomes his de facto squire. It is a hard life, full of battle and hardship, but the youngster worships the sullen, honorable warrior who agrees (for pay) to help the Romans intercept a letter from the apostle Paul to the nascent Nazarene sect in Corinth. Paul, once known as Saul of Tarsus and also a former roman officer seeks to instruct the insurrectionist leaders in the way of faith and has taxed several messengers to deliver his word. One of those has come to the attention of the governors of Judea, so Telamon is hired to apprehend him and return the letter. It is believed that the deliverance of this message represents an existential threat to the Empire. At some point in the mission a transformation takes place and Telamon abandons his promise to intercept the epistle and becomes instead a champion of its delivery.

Replete with period detail of dress, diet, attire, weaponry, politics and religion, this is a truly engaging tale that maintains the interest of the reader. Any lover of historical fiction with a heavy emphasis on the military/political aspect of the first-century middle east with all its upheaval and strife will find this intriguing. The characters are vivid and sympathetic or vile and unsympathetic, depending upon which side they place their loyalty. It’s a veritable thrill ride of violence, emotion and suspense. Finely written with intelligence and verve, this will provide an armchair adventure par excellence.