The completion of the story begun in Hollow Kingdom, this tale encompasses fantastically mutated creatures, the natural world and social commentary. A snarky, smart but narcissistic crow navigates a post-apocalyptic world to protect the last human on earth. 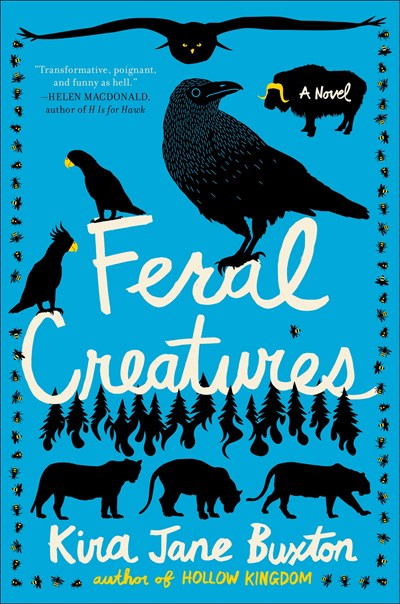 This may appear to some to be a sequel to Hollow Kingdom, the author’s previous work, but it is really the completion of the story. It is narrated by a sentient crow whose admiration for his human companion morphed into a worship of everything created by humankind. They were subsequently demolished by a computer screen born virus bringing about an apocalypse: it is a cautionary tale and much more. As the remnants of the hominid species roam aimlessly, seeking the screens to which they were addicted and by which they were infected (smart phones, TVs, computers, video games, the whole lot) they demolish pretty much everything and kill any living things they encounter. They have also started to mutate into hybrids mocking natural creatures: some grow shells, extra eyes, wings, claws, all in imitation of the various species of animals, adapting and destroying simultaneously.

This happy tale plays out as S.T. the smart, handsome (in his own estimation) and resourceful corvid struggles to protect an anomaly: the last existing human child without mutation. Dee, as she is named is a Native Alaskan child placed in his care by a mother who knew her own days were numbered. His takes this charge with a seriousness that it admirable, noble, even. He is aided in this by a parliament of owls and various other denizens of the natural world engaging in a constant vigil against the depredations of the (not so human) humans. Despite the grim nature of this story, there is considerable humor, some even laugh-out-loud, often scatological or downright obscene. It is in its own way a brilliant amalgam of tragedy and comedy.

Add to this already heady mix some beautiful writing about the natural world and its inhabitants and the reading experience is unique. In my opinion, it is a work of genius. The combination of complex scenes of battle incorporating birds, beasts, fish and cetaceans with bizarre and frightening beings that could be culled from horror fiction is handled with skill and precision. It is science fiction or fantasy, whichever interpretation the reader chooses to call it, but it is fine writing at root. The Armageddon-like ending scenes are crafted masterfully. But it is the descriptions of woods, water, earth, air and the almost supernatural communications between all the aspects of the physical world that elevate the whole to another plane.