In the Shadow of the Fire by Herve le Corre

A complex and moving tale of the Communard revolt in 1871 Paris against the troops of a corrupt government is replete with violence and destruction and an enthralling chase to find a young woman in peril. Serious and substantial. 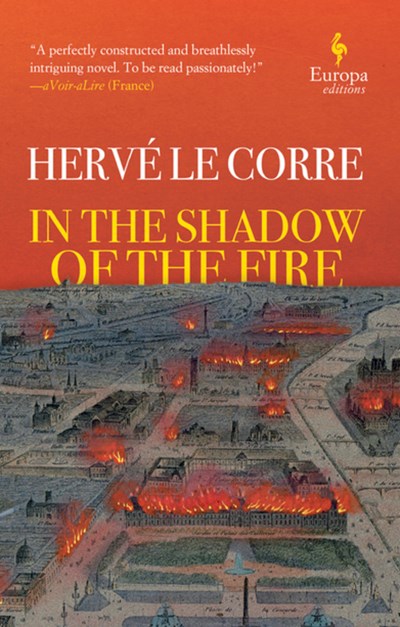 In the Shadow of the Fire by Herve le Corre

This complex and densely written book carries a sensitivity more European, French to be precise, and a more 19th century attitude than a contemporary American one. That is appropriate since the theme is the Communard revolt in Paris in 1871, something about which American readers hear little.

This complicated tale with an astonishing array of characters, an elaborate evocation of the landscape, streets and buildings of Paris and the idealistic political and social motives of the revolutionaries is fascinating to the reader of historical fiction and to anyone interested in politics, social uprisings and human nature. It is a masterpiece of translation and one that must have required herculean effort to manage successfully. It is a most impressive work and one that should be seriously appreciated. At 500+ pages it requires some commitment to approach, but the time is well worth the expense. Comparisons have aptly been made to Les Miserables due to its tone, length and labyrinthine narrative.

The basics are these: a young fighter, his seamstress partner and a French businessman pressed into service as a policeman become embroiled in the bloody and ceaseless fighting between the people of Paris and the troops of the government of France, against whom they are struggling in the effort to achieve social justice. The complication of a sinister photographer who specializes in pornographic matter and his minion, a, enigmatic coach driver who serves him flavor the action with a frisson of sin and evil. As the carnage engulfs the city, the young woman is abducted and imprisoned: her paramour and the amateur but sincere policeman begin searching for her.

Throughout, the ideals of the emerging philosophy of Communism, the fierce independence of the French people and the unswerving loyalty of the common folk manning the barricades against a decadent government guided by the wealthy and privileged is played out against a backdrop of appalling violence and destruction. Admiration and astonishment at the resilience of the working poor might reasonably be expected to be the result of reading this book.