After the Romanovs by Helen Rappaport

A comprehensive view of the Russian emigres, exiles from Imperial Russia and subsequently the Soviet Union. Intimate details of persons and outlines of the cultural and political outcomes engendered by the exodus at the turn of the 20th century. Rich with information and meticulously researched, it is a work of great merit. 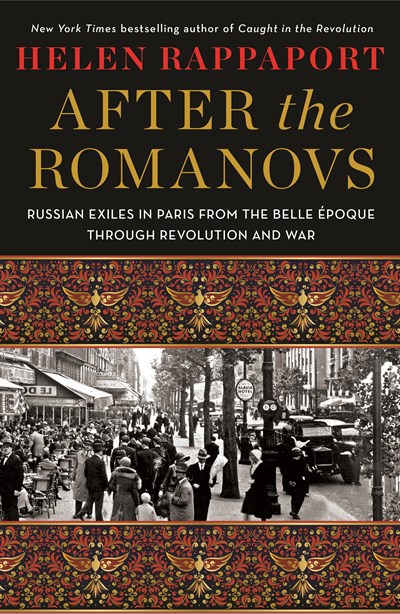 After the Romanovs by Helen Rappaport

This exhaustively researched, densely packed account of the travails of those who fled Russia and later the Soviet Union for Paris and other European capitals is a fascinating look at how after being exiled, people can yearn for their native land and culture. In the case of the Russian people, this longing can be especially pronounced. There is a melancholic character that is traditionally associated with that nationality and when they are severed from their land, the sadness becomes an overwhelming obsession.

A phenomenal work of scholarship including extensive (22 pages) of notes indicating sources and specific items of information and an 8-page bibliography with a section at the back of the book for notes made by the reader (an optimistic but encouraging feature) this is as comprehensive a view of the subject as is likely to be found anywhere. The writing is brisk, if liberally furnished with a myriad of Russian names which can be confusing to those not familiar with them, but the narrative moves quickly and the reader’s interest is maintained, the dense nature of the text notwithstanding. It is not necessary to be able to precisely identify each person identified to gain a sense of the displacement and rootlessness of the uprooted.

Artists of all stripes; painters, poets, dancers, composers, singers, instrumentalists; all of these were part of the émigré community with former military and members of the aristocracy contributing to a boiling pot of intellectual fervor for a return to the mother country. Plots of varying practicality vied with each other for the attention and support of the thousands of refugees living principally in France and Paris in particular. The tension within the émigré ranks was unceasingly compelling, to the point that suicide became an all-too-common phenomenon. Poverty and disenfranchisement pushed many into untenable living situations. At the same time, the founding of the Ballet Russes, and a few successful composers, painters and writers created what are now viewed as classic works. Think Nijinsky, Chagall and Nabokov.

Among the aristos especially, the lack of any marketable skills presented problems. Many a grand duke became a taxi driver, to the point that it was a decades-long joke that any cab in Paris was likely to be driven by a former member of the Russian nobility. Many of the women possessed skill in needlework, the only practical thing they had ever been taught and some even managed to parlay that ability into modest wealth, a few even founding fashion houses, but they were the minority. Many more toiled in dim hovels producing embroidery for clothing manufacturers. Vast numbers labored in factories, principally in the automotive industry. It was not an easy life, or even a comfortable one. It is a heartbreaking story but a clear-eyed account of this meaningful movement which would have repercussions in culture and politics for decades. It is a fascinating read and one this reader would recommend to any student of history or human nature.