May God Forgive by Alan Parks

This is a real page-turner, especially if you enjoy conflicted protagonists, gritty crime fiction and atmospheric landscapes. 1970s Glasgow provides the rainy, gloomy backdrop for this dark tale of crime and near-crime committed by the villains and sometimes by the police. 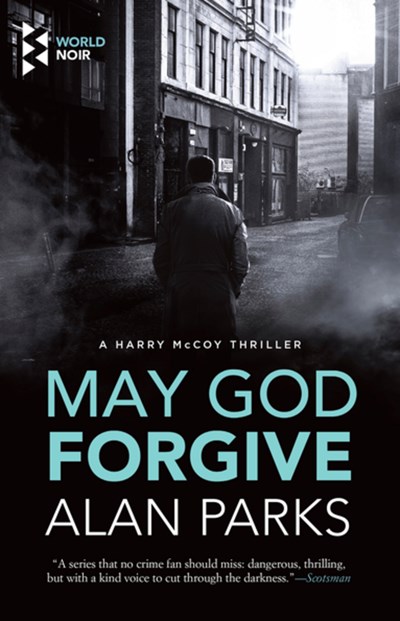 May God Forgive by Alan Parks

The term “guilty pleasures” applies in this case, certainly for this reader. To take joy in the grim, gritty, violent and corrupt depicted with disconcerting alacrity is not, perhaps, the most appealing trait, but it is one that is shared by millions of lovers of crime fiction. If this is the case for you, then you must read Alan Parks’ Harry McCoy books, the latest of which is this, set in 1970s Glasgow, a dark and forbidding place to be sure. This, the fifth in the series features a fatal fire in a beauty salon that has killed several women and a pair of young girls. The perpetrators are apprehended but are waylaid on their way to the assizes. The job of Detective Harry McCoy is to find them before the citizens of Glasgow do. If the mob puts their hands on them, they will surely be mercilessly shredded. Harry, recovering from a gastric ulcer, alternates between being able strong-arm suspects and villains and doubling over from pain brought on by his condition. He is a classic conflicted protagonist, a hero/evildoer that fuels his search with illicit drugs, alcohol and a violent personality that emerges periodically. Dark stuff.

In his quest for the meanings behind this crime and others more historical, he encounters a motley troupe of ne’er do wells of the Glasgow underworld. Enlisting the aid of some, threatening others (sometimes simultaneously), he maintains a perilous balance between intimidation and yeoman police work. A lowlife pornographer (a redundancy, perhaps, but this guy is the worst of the worst), a longtime associate who is a warlord of the city, a homosexual gadabout who knows all the secrets, a drug dealer whose office is a stall in a pub loo, and much to Harry’s distress, his own father, now a hopeless drunk and derelict who elicits memories of Harry’s youth on the streets doing unthinkable things to survive all make appearances. Piece by piece he assembles a picture of how all the vile events fell out, without gathering enough hard evidence to make any charges stick.

All the while, his partner, a moderately competent but uninspired detective with a journalist wife and an infant son provides the one island of normalcy in Harry’s bleak existence. His volatile boss and a police force struggling with walking a line between criminal behavior and proper constabulary procedure aren’t much help, but he soldiers on, driven as much by internal angst as a desire to see some justice done. Sometimes it’s hard to tell the white hats from the black.