The Book of Lamps and Banners by Elizabeth Hand

A dark, punk-culture kind of thriller with plenty of sinister characters and flawed protagonists who are fighting their own personal demons propel this fast-moving story of drugs, music, photography and death. Not to mention the mind-altering potential of an ancient tome with mysterious embedded codes that can alter the mind. 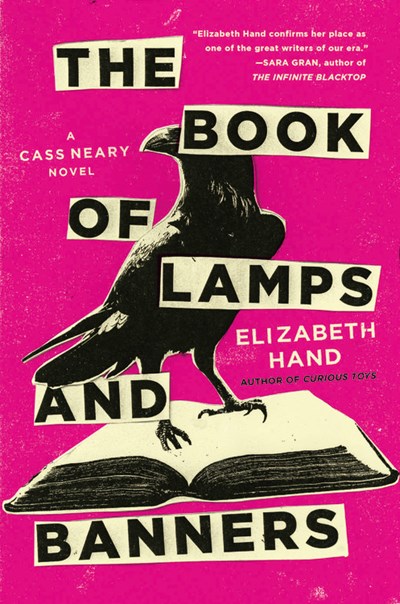 If you like your urban fantasy and/or mystery thrillers hardboiled, this one’s for you. The protagonist, Cass Neary, is a profoundly damaged woman who has made photography her life, especially photographs of those who are now dead or would be shortly after she snapped them. Fueled by drugs and alcohol she lives in the shadows, often a few steps ahead of authorities who would love to bring her in for any number of transgressions. Leaving a wake of broken promises, debts owed, friends betrayed and personal dignity shredded, she careens into the search for a legendary, almost mythical book that may hold secrets crucial to the development of a computer app with sinister capabilities.

Assisted by her former/sometime/always boyfriend Quinn, an ex-con/hitman/recovering addict himself, she is drawn ever more deeply into a world of white supremacy conspiracy theorists,  death cult devotees and a sister sufferer of abuse who wants to find a way to heal psychic wounds inflicted in childhood. Everyone, it seems, wants this ancient and arcane volume which is said to have text written in the hand of Aristotle. It’s that old, and older.

A software developer who is also a rape victim and has found ways to tap into codes that affect human psychology is after the Book of Lamps and Banners. She has discovered that the languages, runes, illustrations and formulas contained within will enable her to manipulate people’s minds, ostensibly for the better, but that’s up for debate. It may also be a pathway to the destruction of the brain of anyone exposed to it. Cass finds that even one loose page of it can send her into flashbacks of her own rape and near death.

From Britain to Sweden Cass and Quinn travel clandestine pathways dealing with characters who are shady at best, downright evil at worst. The suspense is palpable and is maintained at a high level throughout. Runic messages, Norse myths and mythic beings, a subculture of pop music and death culture are recurring themes and provide a disturbing but effective backdrop for this clever and tightly written tale.