The Gate to Women’s Country by Sheri S. Tepper

A feminist take on the power struggles and causes of friction between women and men and how they might, in a post-apocalyptic world, be cast in another mold. 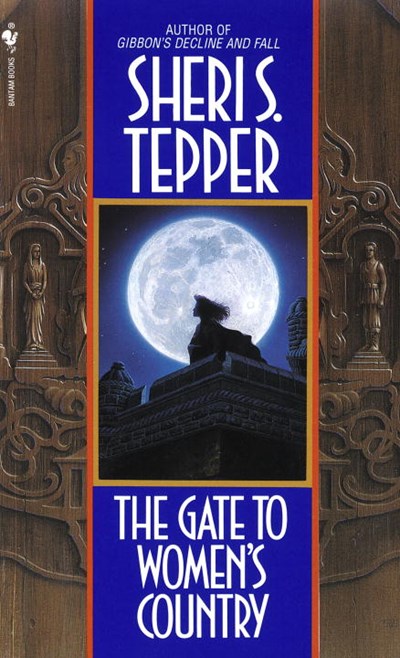 The Gate to Women’s Country by Sheri S. Tepper

Full disclosure: I worked for Sheri Tepper many years ago when she was the Executive Director of Rocky Mountain Planned Parenthood and I was a minion in the publishing department. We were hardly close friends but I did know her and we nodded to each other in hallways. I have great respect for her as a reproductive rights advocate and particularly as an author. Ms. Tepper is no longer with us, but her literary legacy lingers. The original publication information is unclear, but it is apparent that the book was first printed in 1988, long after I had left RMPP.

This is an important book, and one which merits revisiting. It is a feminist study which one would have hoped to be less necessary now than then, but that is not the case. The tale is one in which the world has suffered a cataclysm destroying most of civilization. We now call this post-apocalyptic fiction, but the term was not widely used at the time of publication. The principle cause of the disaster was the pride and arrogance of men who continually strove to dominate the world with their strength. The prime savior of what is now left of humanity is the women. They have crafted a society in which the large part of the menfolk live outside the walls of cities deemed “Women’s Country” where science, medicine art and crafts have been preserved. The men are warriors ostensible tasked with the protection of the women and their male partners, the “servitors” who are widely believed to be emasculated refugees from the warrior’s camps. The fragile balance and the ebb and flow of power are the meat of this story.

At age 5, males are presented to their presumed fathers, having been conceived during semi-annual carnivals when the men are permitted inside the walls to mate with designated women for the purpose of procreation. When the boys reach 15, they are allowed to choose whether they wish to remain in the warrior fold or return through the “Gate to Women’s Country” and become part of the culture inside. The dynamics of this arrangement are difficult to manage and become problematic, as in this tale.

The whole is a thoughtful if pointed exercise in demonstrating the differences, sometimes associated with gender, but often the result of breeding and nurture that places the bulk of the blame for oppression on the men, but with the sometime collusion of individual women. Altogether it is a reproach of the prevailing attitudes of the patriarchal system under which most of the world functions. The story, though, is a good one and can be read as a straightforward fantasy with feminist overtones. It is a book that should not be forgotten.