The Lamplighters by Emma Stonex

The mysterious disappearance of three lighthouse keepers from a sea-bound tower drives this suspenseful tale rich with details of life in such places and the effects on the people who maintain them, the companies that operate them, and the women who remain on shore while their men are sequestered away from land. 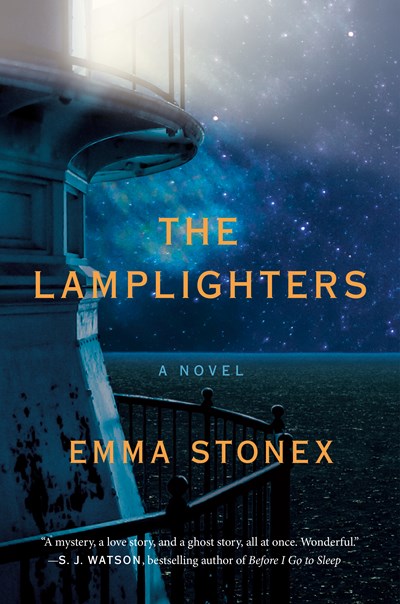 The Lamplighters by Emma Stonex

This complex psychological mystery/suspense novel works on several levels as a satisfying examination of human perceptions and the consequences of miscalculating and misidentifying them. There are notes of horror here, too, but at root it’s a tale of unraveling the threads of three relationships and the effects upon each other the participants wreak.

Three men are given the job of maintaining a remote lighthouse off the Cornish coast. It is what is called a “tower”, that is, one placed on a rock at sea with no attachment to land. No cozy keeper’s cottage, no access to land-based supplies or support and limited communication. Because of the remote nature of the facility, they must be separated from their wives for weeks at a time. The wives are housed in houses neighboring each other on land close enough for them to see the tower, but without any means of corresponding other than letters. When at home these keepers are affected by the stress of enforced confinement and the continual struggle against a brutal sea that can, and sometimes does, kill. They cope with varying success at maintaining a normal life.

On a day when the relief boat has gone out to deliver supplies and needed equipment the sea door is found to be locked from the inside and the keepers are nowhere to be found. They are never found. The mystery of their disappearance becomes the central dilemma for the wives, the lighthouse’s parent company and the locals who dream up a plethora of explanations from the quotidian to the bizarre and even the supernatural. Loss, fear, doubt and trepidation about the future plague the women, exacerbated by suspicions of infidelity between the keepers and their mates. It is a tangled net.

With skill and facility, the author strings out a fiction based on speculations about a true instance of similar happenings the early 20th century along the same coastline. The revelation of what really happened is kept under wraps until the very closing of the book. As a result, the suspense is palpable and maintained at a high level throughout. Ornamented with elaborate details of life on the towers, the attitude of the companies that owned and operated them and the place of women in a coastal society that has changed little since the 19th century it is an absorbing story that will appeal to readers of nonfiction and especially those who love sea tales.