The Shooting at Chateau Rock by Martin Walker

A combination of cozy, procedural and thriller mysteries, this tale set in Southwestern France is rife with food, wine, domestic animals and French Law. It is enchanting and thoroughly enjoyable. 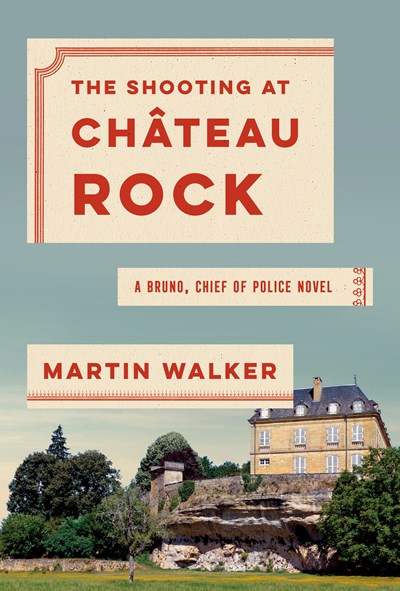 The Shooting at Chateau Rock by Martin Walker

What a refreshing surprise to begin a novel thinking it a standard murder mystery and find that it is a combination of cozy, thriller and procedural. Before picking up The Shooting at Chateau Rock I was unaware of Martin Walker, but his oeuvre is extensive: one I will have to investigate. The subtitle, A Bruno, Chief of Police Novel, tells us something to start which is that it will be character driven and personal. The aspect of personality is significant since we’ll spend a lot of time with Bruno in his kitchen, his garden, at the stables where his horse is housed, at the homes of friends and colleagues and in the city offices of his town, St. Denis, in the Dordogne valley, in the Perigord, a region of Southwest France known for its agricultural products and cuisine as well as its rural beauty. The landscape plays as much a part as any person in this tale.

Bruno is an active cop intimately involved in the daily lives of his neighbors and friends who seems to be endlessly cooking, gardening, riding, organizing local cultural events and keeping a watchful and paternal eye on his charges. He takes any threats to the citizens of St. Denis personally and will pursue the miscreants with creativity and perseverance. His is not the “cuff ‘em and lock ‘em up” type of policing: he will find clever ways to employ the complicated French legal system to tie the hands of those transgressing against “his people”.

In the pursuance of these goals, he spends time cooking a marvelous array of dishes which the author describes in detail, so much so that the reader could conceivably create them from the narrative of the book alone. The ingredients come from, alternatively, his own extensive kitchen garden, the shops of St. Denis and from the larders and wine cellars of his acquaintances.

There is also a great deal about the treatment of animals, most particularly his Bassett hound, Balzac, his horse Hector, and his poultry (geese and chickens). His concern does not end there, however. He is also greatly concerned with the humane care of farm animals as demonstrated when he charges corporate bureaucrats with neglect of the sheep and other farm stock of a deceased farmer’s estate. He is unswerving in seeing that all creatures are dealt with fairly and in a manner beneficial to the stock.

In the matter of crime, he is as steadfast in pursuing felons as he is in defending the creatures of the field and barnyard. His knowledge of French laws and statutes is encyclopedic and he uses the law to its greatest benefit. He is connected to other local officials and the police officers in the region and calls in help with forensics, transportation, obtaining warrants and permission to act. The crime committed is almost an afterthought, although the narrative works up to it for the entire book. It is a different and thoroughly enchanting take on the classic mystery novel that I recommend to anyone who loves the genre.