The Splendid and the Vile by Erik Larson

A new and intimate look at Churchill’s daily life, in detail, through the first year of his tenure as Prime Minister. Personal accounts and observations made by those who were with him illuminate this extraordinary biographical work. 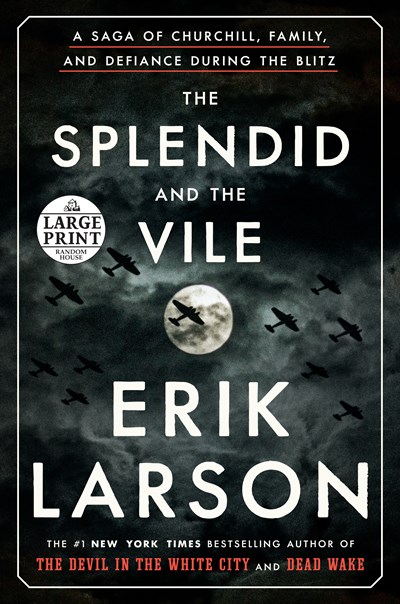 The Splendid and the Vile by Erik Larson

Generally, there are readers of fiction and readers of nonfiction and never the twain shall meet. I admit to being one of the former, mostly. But sometimes I stumble into a nonfiction title that is so compellingly written and intensely interesting that I forgo my disinclinations and biases and dive in with gusto. Such is the case here.

Winston Churchill, one might think, has been biographed unto death. He has, but this intimate personal account of the days of his first year as Prime Minister of England brings a fresh approach that is fascinating and engaging. Larson has delved deeply into daybooks, calendars, diaries, memoirs and personal papers to produce a warm, charming excursion through the dark days and nights of the Blitz and the bright times that made life in the British Isles tolerable in spite of the grim circumstances. The author helpfully tells us at the start that anything seen between quotes has been taken directly from original source material, so if he says Churchill or anyone else said something, they said it, recorded it, or were witnessed making the statement. In other words, nothing is made up, even the conversations. This becomes more important and the narrative plays out and the reader is made aware that it is a gift to have factual statements to illuminate the man, his family and his times.

By using entries from diaries and personal accounts of private secretaries, members of the government, acquaintances and friends of the family, the author creates a tender vision of the embattled bulldog we think of with frailties, hesitations and finer feelings for those around him. We admire the man the more for overcoming personal misgivings to put a brave face on a desperate and frankly daunting situation in order to preserve the morale of a nation and to fight the threat to the world. The reader’s respect for the man, despite his faults (which were legion) is only magnified by hearing, from his own mouth, as it were, and the mouths of his intimates exactly what went on in the days and nights of 1940 – 1941, the first year of his Prime Ministerial reign. He employed manipulation, coercion, chivvying, coddling, flattery and naked intimidation to achieve what was, in his mind, never in question, the struggle to emerge victorious over Hitler and the Nazis.

All the while, his family and friends were living their lives watching him hemorrhage energy and physical resources but retaining his humor and playfulness, sometimes pushing through the worry and grief. He could be remarkably puckish, loving music and even dancing, when in his times of worst concern for the empire. His ability to turn maddeningly frustrating circumstances into verbal barbs of exquisite comicality have become famous, rightly so. He was truly a remarkable individual and one who did what no one else could have.