The Storm of Echoes by Christelle Dabos

The fourth and final volume of an epic fantasy. Young Ophelia must navigate dangerous waters, avoiding numerous perils. Complex and rich narrative with a multitude of fascinating characters and suspenseful action. 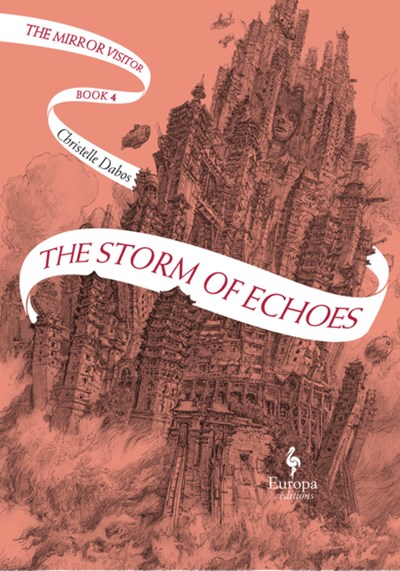 The Storm of Echoes by Christelle Dabos

This is the final book in the Mirror Visitor saga, having been preceded by A Winter’s Promise, The Missing of Clairdelune and The Memory of Babel. As a whole, the work is a magnificent achievement. It is complex nearly beyond description and the crafting of it represents a literary benchmark. I put it in the category of Mervyn Peake’s Gormenghast Trilogy and the Pern books of Ann McCaffrey. A host of characters, each distinct and fully realized within the matrix of the story requires some concentration upon the part of the reader to track adequately. The effort is worth it.

Ophelia, the protagonist is an Animist, a member of a family given the power to animate objects. A sentient scarf that argues the best way to proceed, papers that organize themselves, utensils that perform their tasks independently, that sort of thing. She also possesses the ability to “read” objects and discern the actions of those who have most recently handled them. Think of a weapon used in a crime: who last wielded it, and what they did. A doorknob of an open door: who went in? To avoid an overwhelming flood of such information, she constantly wears gloves and only removes them when her skill is needed. She is also a “mirror visitor”, able to transport from one place to another via mirrors, as long as she knows where she is going and there is a mirror there.

She lives in a strange universe that has suffered a cataclysm separating into distinct parts, called “arks” each one with a resident god and peculiar distribution of paranormal skills and talents. It would be fruitless to attempt a full description of this world but suffice it to say that it is a dangerous and complicated place, and it is Ophelia’s lot to navigate it in search of the echo of a creator that seems bent on destruction. Those she meets, allies with and works against form a rich tapestry of characters, good and bad.

The “take” on all of this is that it’s a commitment to start and finishing it will bring the satisfaction of having accomplished something worthwhile. It’s delightfully diverse, containing humor, pathos, suspense, villainy, and redemption. Take a deep breath, figuratively gird your loins and dive in.