We Begin at the End by Chris Whitaker

A powerful story of a small-town sheriff trying to right past wrongs and a teenage girl painfully striving to find her place in a flawed world. 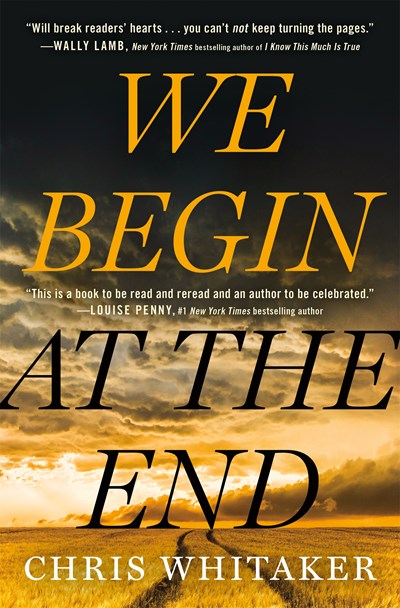 We Begin at the End by Chris Whitaker

It is seldom that I am affected so emotionally by a book, even though I live in them most of my waking hours. I have read numerous quotes asserting that it’s a heartbreaker. It is, and it broke my heart time after time. I was brought to the brink of tears so many times that I won’t try to count them. This is a powerful work and in my humble opinion, should be embraced by the community of readership with open arms.

Without using florid language or elaborate constructions, beauty, ugliness, hope, fear, love, hate and most importantly, redemption rise from these pages. There are no shining heroes, no epic quests, no unredeemable villains, simply plain folks struggling to make sense of the mistakes we make by living. The one feature that resonates throughout without qualification is love. No matter what misfortunes, betrayals, missteps or failures in understanding occur, love remains, endures.

Duchess Day Radley is thirteen, and styles herself an outlaw. There are, arguably, outlaws in her heritage, and she truly fits the pattern in her life and attitudes. She is rebellious, the quintessential outsider bent on vengeance when wronged, defiance when challenged. She is, in spite of her objectionable behavior an appealing character: a child becoming an adult in a world that has spared her little pain.

Walk is an overweight, soft-hearted native of Cape Haven, a small town on the coast of California, somewhere in the Big Sur. He’s also the sheriff, a position in which his native compassion does not always serve him well. Because of a tragic occurrence in his adolescence, his best friend Vincent has spent that last thirty years in prison, leaving behind broken hearts and emotional wounds that have yet to heal.

Walk has taken upon himself the task of watching over Duchess and her younger brother Robin because Star, Duchess’s mother and Vincent’s onetime sweetheart has unraveled and is an unreliable parent, making her living singing in a local dive, abusing alcohol and drugs and consorting with Dickie Darke, a sinister local businessman widely believed to be a brutal and ruthless bully who has Cape Haven in thrall. When Star is found murdered, Vincent sitting calmly in her living room, covered in blood and docilely surrendering to the cops, a sequence of events begins that is fraught with fear, uncertainty and heartbreak. There’s that word again.

This extraordinarily moving work has great power, the simple language propelling an empathy with the players that cannot fail to capture the reader’s heart. The landscape, as it changes reflects the progress or regression of each, the beauty and ugliness shaping the outcome. It is a worthy piece of writing that I recommend to anyone.