Once We Were Here by Christopher Cosmos

An epic story of the Greek resistance to the Nazis, their unimaginable courage, heroic sacrifices and a love story for the ages. 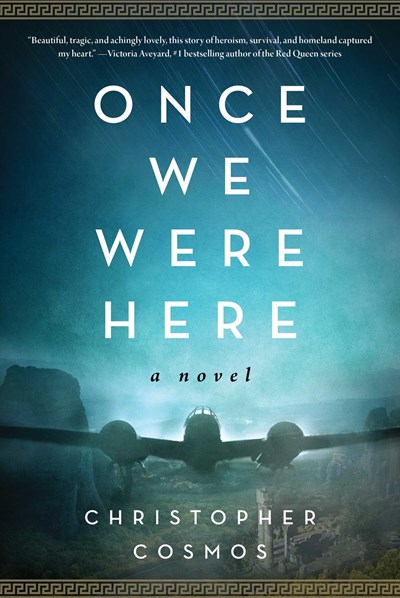 Once We Were Here by Christopher Cosmos

This book is an affecting evocation of the kind of heroics performed during World War Two but mostly forgotten by the public. Much was made at the time of the courageous sacrifices made by the Greek army during the German invasion of that country, but history has not fulfilled the promise of memorializing it in the ways that other actions in that conflict have been. We know about the disastrous Nazi attempt to defeat Russia and the outcome of that misadventure, but their failure depended upon diverting troops to fight the Greeks, spreading Hitler’s manpower and materiel perilously thin. Little has been said of the extraordinary effort of partisans and regular Greek troops in stalling the takeover of their country which was heralded by Churchill and others as one of the most remarkable resistance actions ever. There are some statistics which may resonate when recognized as evidence of the adamant stance taken to fight the Axis onslaught. The Greeks resisted occupation for a total of 219 days: the next longest was Norway which held out for 61 days, others far fewer. Greece lost 10% of its population in the fighting: the Russians 2.8%, France 2%. Numbers do not adequately tell the story but these are stunning figures.

The narrative centers on three friends who are living peaceful lives in relative happiness when first the Italians, then the Germans sweep in from the North to occupy their country. The Italians are quickly, if bloodily defeated, and a short period of respite was earned. But inevitably the Germans descend with their Panzers, powerful machine guns, rockets and multitudes of soldiers. The fight begins in true earnest now and many patriots are killed. Alexei and Costa, two boys from Agria have grown within sight of the sea in the small eastern fishing village. Untrained and innocent of the realities of war, they quickly learn the methods of killing and the other skills of warriors. With a full appreciation of history and the famous figures whose legacy they bear, they resist with fierce abandon in the best tradition of Achilles, Alexander and others. The third of these is Philia, Alexei’s wife, pregnant with their son, newly wed and forced to acknowledge the primacy of Nazi rule. Their story is an epic one, told to a young American by his Greek grandfather.

As an adventure novel, this has all the bells and whistles, but there is much more to this than just an exciting read. The heroism and courage of the Greek people when faced with arguably the most evil and frightening force in history is inspiring and humbling. The love story between Alexei and Philia is mirrored by the deep love the men feel for their fellows in combat and the abiding pride in their ancient nation. It is a fine work worthy of recognition as an evocation of a history that should be remembered with honor.