A bizarre, hilarious, incredibly inventive fantasy from the master of the absurd. Probably not for nonfiction readers, but for those who love the wild humor of Moore, it’s just the ticket. 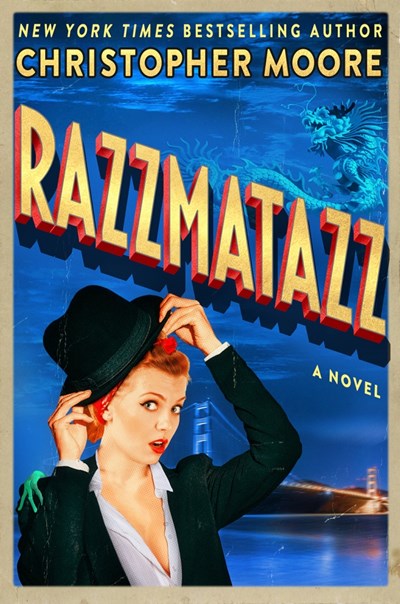 If you like the products of Damon Runyon, Dashiell Hammett, Raymond Chandler, Mickey Spillane or Groucho Marx, you’ll like this one. True to form, Moore has produced another exquisitely absurd masterpiece that is guaranteed to elicit belly laughs and a few shocked
moments, just what his fans need, want and expect. As usual, the outlandish is everyday fodder for his vivid characters who are strangely accessible, almost as though they were real people, but not. Explanation of one of Moore’s books is impossible, but reactions are relatable.

Here we have Sammy “Two Toes” Tiffin, his main squeeze Tilly Stilton (known as “the Cheese”, but not to her face), Eddie “Moo Shoes” Shu, Squid Kid Fang, and an accompanying cast of equally bizarrely named characters who all live on the fringes of late 40s San Francisco society. A parade of gay clubs, dyke joints, whorehouses, dive bars and Chinatown provide the backdrop for the action, which is quite unbelievable but joyously entertaining. You get the idea, right?

Someone is killing off the lesbian patrons and employees of the much-persecuted lady clubs and Sammy is called upon to excuse himself from his bartending gig to catch the killer, help a friend who is both lovelorn and career-stumped, find a mythical Chinese idol to prevent a murder and provide logistics for Christmas party at a home for the feeble-minded which will be carried off by prostitutes (they prefer to be called “courtesans”) in elf attire whose madam will play the part of Mrs. Santa Claus. Heard enough? Not hardly. In the meantime, Cheese is involved in some kind of clandestine industrial construction project with truly weird side effects for the female workers, who are former welders and machinists, now cast aside since the war has ended. Cops, the Feds, gangsters, hookers, Chinese opium-den operators, bouncers, waitresses, a cabbie with a phobia about driving and some others difficult to categorize properly all have their parts in this circus of off-kilter adventure. All of this is backstopped by the story of Moo Shoes’ uncle Ho who was among the Chinese who immigrated to this country before the earthquake of 1906 and who was the original thief of the dragon statue that figures seminally in this tale. Enough to get you interested? It should be.