A Colorado River rafting trip becomes a battleground over water rights, conservation and revenge. Murder most foul in the glory of the Grand Canyon. 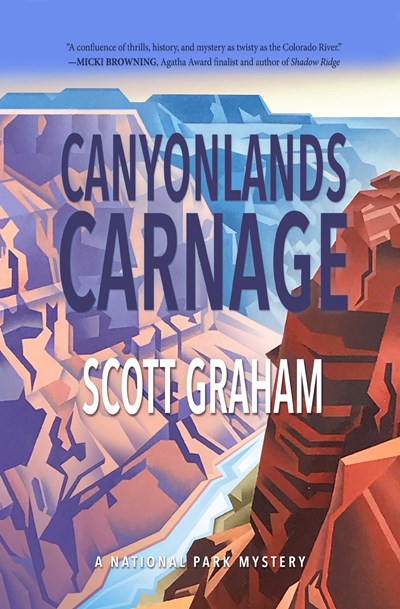 Water in the West has always been an issue, so much so that confrontations have come to blows and even gunfire in the past. That has not changed and will not in the foreseeable future. Imagine, then, a raft expedition down the Colorado River through the Grand Canyon involving conservationists, environmentalists and corporate users of the precious commodity committed to ensuring profits for their masters. Ostensibly an exercise in accommodation and compromise, the discussions are bound to be heated, but the expectations do not include death, especially when it becomes likely that the cause is murder.

The protagonist, Chuck Bender, an archaeologist and experienced river runner is brought along to enlighten the company about the history and geology of the region as the trip progresses. He begins to suspect foul play when the second death occurs shortly after the discovery of the hidden remains of a John Wesley Powell expedition river boat, a find that both archaeologists and historians would find potentially meaningful. Tension mounts, suspicion burgeons among the crew and guests, and an additional factor, the appearance of Chuck’s wife and stepdaughters who have come through considerable trouble to find and warn him of danger all coincide into a complex and fascinating murder mystery played out on the background of water conflict.

Both entertaining and educational, this book is not only a good, fun read but a lesson in the perils of our profligacy with an increasingly limited resource necessary to life, both human and riparian. We have less time than may be generally imagined to rectify what is fast becoming a dire situation. I will depart here from my usual practice to mention another book, one less salubrious but with the same concerns. The Water Knife by Paolo Bacigalupi (Vintage paperback 2016) is a far grimmer and sobering contemplation of a time when state militias engage in open warfare over water rights. It’s happened before and can again. We need to pay attention now, and Scott Graham’s book is an excellent primer on the basics couched in an engaging whodunit that tells the story in an approachable manner. Those who love the planet should read this one.