Why did people build the way they did? What were their daily lives like, how did it affect the structure of their communities and why did they leave? This is a careful look at domestic spaces, streets and gathering places and the remnants left by ordinary folk. It is enlightening and entertaining, two essential factors in nonfiction narrative. 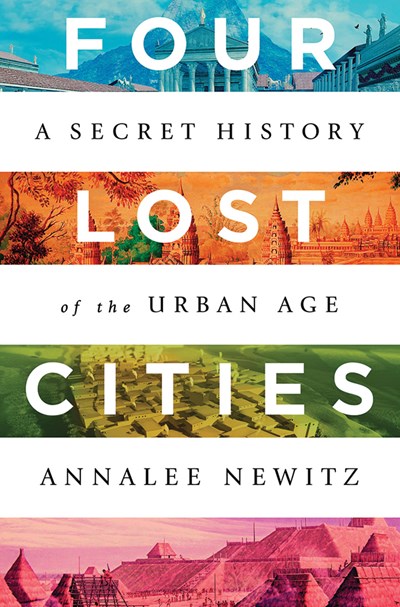 This exploration of the disappearances of four cities of the ancient world takes a new approach to describing the phenomenon. Unlike the traditional method of chronicling the kings and chiefs, those in power who created massive monuments and revolutionary systems the author looks at the lives of the commoners who gave life to these places. Why did people build the way they did? What were their daily lives like, how did it affect the structure of their communities and why did they leave? This is a careful look at domestic spaces, streets and gathering places and the remnants left by ordinary folk. It is enlightening and entertaining, two essential factors in nonfiction narrative.

Catalhoyuk in Central Turkey was arguably the first true city in human history. It qualifies in most categories. It was home to 10,000 people or so and lasted for more than a thousand years. It was unlike modern urban entities due to its lack of public buildings or spaces. It was more a collection of dwellings populated by people of roughly equal status. It did not disappear overnight but was abandoned in stages as people grew tired of the way of life they endured or saw better ways to furnish their needs. Smaller, more agriculturally oriented communities supplanted it, as did other places with better amenities or opportunities. It wasn’t “lost”, as early archaeologists supposed. We see how that assessment of such places was almost universally incorrect.

Pompei we all know, but there are aspects of the place that are not commonly recognized. Why did anyone stay after earthquakes and several days of volcanic pyrotechnics? Who were they? What happened after, and where did the survivors go? By looking at the lives of the non-elite, the servants, slaves and tradespeople, the author reveals answers to these questions. It is also interesting to note that the Roman government, in the aftermath of the conflagration, furnished aid quite like what FEMA does today in the wake of hurricanes, wildfires and such. Also enlightening are facts about the structure of Roman cities, their traffic strategies, commercial life and infrastructure solutions.

Angkor Wat was for years thought to be a walled city dedicated to religious rites and ceremonies. That is partly true, but the city proper existed mostly outside of the walls that were misunderstood to have defined the whole. An astonishingly complex system of waterways constructed for ostentatious landscaping purposes, water supply, transit and drainage were built by an ingenious method of taxation: labor. Rather than furnishing money, goods or produce as taxes, citizens contributed designated periods of labor to the building of the fabric of the city. The construction, operation and sustaining of the city were ingeniously conceived and of great interest. What we see today is a tiny fraction of what was, and there were other great urban areas created before and after it that are part of the greater story.

Finally, a look at Cahokia, the massive pre-Columbian city on the site of present-day St. Louis, MO reveals a complex and elaborate culture that has been nearly obliterated by subsequent happenings and the overlay of culture on culture. Once the largest concentration of humans and the greatest trading and cultural center of North America, its reality is now becoming evident as more work is being done to unearth and understand its people and their lives. An interesting and unusual pattern of life in some ways similar to Catalhoyuk has emerged as excavations show how dwellings were built, used, razed and rebuilt in ways that were closely bound to spiritual beliefs. The presence of artifacts much older than the city itself indicates its denizens’ interest and reverence for history and ancestry. Much is still to be learned, but once again, it is the lives of the commoners, and not the elites who can tell the real story of this “lost” place.

Any reader of anthropological writings will find this fascinating. Discussion relating to the controversies surrounding previous works on the subject add to the spice of this ongoing field of research. Anything that adds to greater understanding of how cities arise, function and decline is pertinent to anyone living today.