My Grandmother’s Braid by Alina Bronsky

Russian refugees struggling to make a life in Germany vie with an alien society and the grandmother’s natural contrarian personality in this funny and poignant tale. 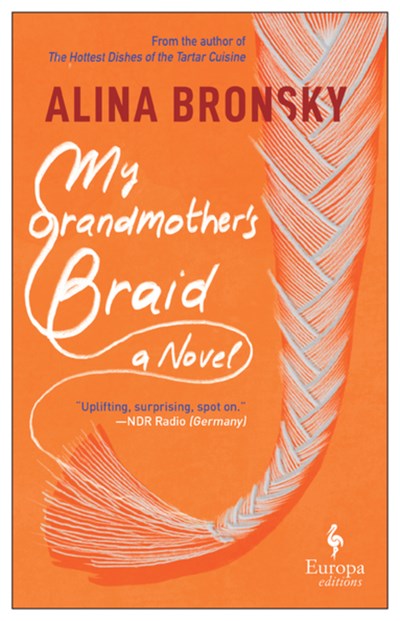 My Grandmother’s Braid by Alina Bronsky

I can’t decide whether to call this a comical tragedy or a tragical comedy. Aspects of both permeate the narrative. It is wickedly puckish, funny in a dark way that intrigues the reader and maintains a level of interest that makes this a quick read. The dialogue is clever and at times shocking, that of the narrator not the least.

Maxi is a young boy brought to Germany as a refugee from Russia by a grandmother who is without pity and almost criminally cruel in her regard for her charge. The grandfather is a taciturn and enigmatic figure (he’s of some unspecified Asian ethnicity) who softens Maxi’s harsh life somewhat. Oma’s constant references to his defects, his health and life prospects as she views them would be depressing in an ordinary accounting, but the author somehow magically transmutes them into an amusing narrative, hard to imagine but fascinating in the manifestation. At the root of it all is a kind of twisted love, warped by guilt and regret, hardened in the forge of Soviet culture. All of this is seasoned by a contempt for the German country and people, even though they offer salvation from what would certainly be a grim existence if not for the acceptance into the society of the city in which the family finds sanctuary.

As the boy matures he learns to circumvent most of the strict dictums (no sweets, no condiments, no contact with those outside the family, stringent sanitation of every item and surface multiple times daily, etc.) enforced by his grandmother who berates both Maxi and her husband with astonishing regularity. He also begins to understand that Oma’s notions are not necessarily always true. Love even begins to bloom in his oppressed soul, and a kind of acceptance of both himself and his guardian bid fair to allow him to become comfortable with life, if not exactly joyous. At the same time, the grandfather finds an opening to a more fulfilled existence in a surprising way that alters the family dynamic in strange and fascinating ways. Most intriguing.

The author is a talented scrivener with an extensive track record who is well known in Europe and becoming more so in the U.S., with good reason. Thanks to Europa Editions for continuing to publish her works for American readers. This one is strange, funny, touching and has a substantial literary heft that satisfies fully.