Next to the Last Stand by Craig Johnson

Once again the rangy, well-read and philosophical Walt Longmire is hunting down miscreants, this time the thieves of a fabulously valuable painting of Custer’s last stand. Using his intellect and considerable capacity for withstanding physical abuse, the big guy prevails, as we knew he would. Great fun and you might learn a thing or two (always) reading Craig Johnson. 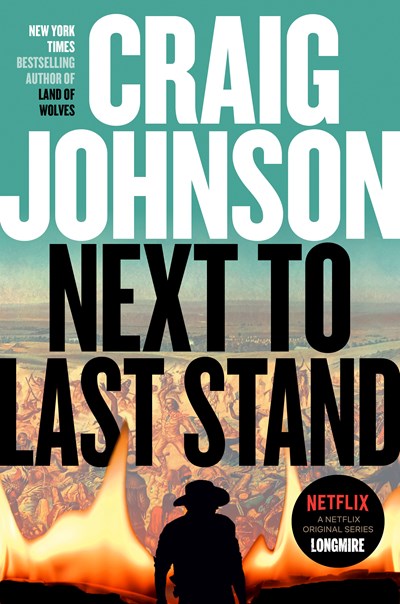 Next to Last Stand by Craig Johnson

What really happened at the Little Bighorn is and will probably be up for debate. What is clear is that it was an iconic event in the country’s history and shaped beliefs and opinions to the present. One of the most powerful disseminators of disinformation about the occurrences there is a painting entitled “Custer’s Last Fight” purchased by August Busch and reprinted for distribution to taverns in the United States. Millions were printed and hung in every bar, VFW hall and public building across the nation. The fact that it is mostly wrong in every detail matters not to its importance in American folklore.

It is said that the original painting was destroyed in a fire, but evidence arises that points to its continued existence and a struggle for its possession. That struggle results in the death of a denizen of the Soldiers and Sailors Home, a place Walt Longmire visits on a regular basis and on which he now focuses his attention. Apart from the fact the victim is an old friend, murder is murder, and Walt cannot fail to seek the causes and find the culprit. It is his unwavering devotion to seeing right done that makes him such a beloved character. He will pursue the truth, even at considerable peril to himself, an eventuality that comes to pass in this tale. But we are used to him being in danger and even at risk of his life, and we know he’ll come out on the other side, bruised, battered and bloody but triumphant. What a guy! Guts, brains and steadfast determination. Ya gotta love him.

Veterans mounted on hopped up electric wheelchairs, shady art dealers, skeptical fellow sheriffs and a Russian oligarch nicknamed “The Bloodletter” are all tied up the most amusing fashion in this latest installment of the big guy’s peregrinations. The dry humor and down-to-earth dialogue for which the author is deservedly well-loved are present and accounted for, to the great joy of loyal readers. Walt takes a beating (no surprise, really) but comes out on the other side in an unusually quirky ending that is sure to please. Of course, Henry and Vic as well as the usual gang and a newcomer to the scene are all in attendance, so altogether, it’s a helluva party. You will not want to miss it.