The Evening and the Morning by Ken Follett

Rich with detail, rife with conflict and resolution, and entirely satisfying to any fan of Follett’s Kingsbridge books. 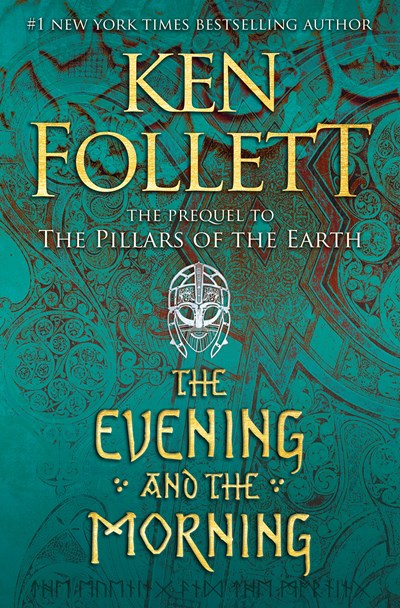 The Evening and the Morning by Ken Follett

Those who have fallen in love with Ken Follett’s Kingsbridge series beginning with Pillars of Earth will not be disappointed with this massive historical novel. A history lesson, a love story, a damn fine tale skillfully told and richly embellished with widely varied detail, it satisfies the hunger of readers and pushes all the right buttons.

Edgar, the young son of a boatbuilder on the Southern Coast of England is driven out of his Devonshire coast home by a Viking raid. His father killed, his town burnt to the ground, his mother and brothers made homeless, Edgar calls on his native intelligence, considerable manual skills and innate craftiness to survive in a brutal world dominated by those who wield power, either physically or politically. Life in Britain in the first century could be grim, especially for those without influence or wealth. The family is fortunate to acquire the ear of a sympathetic official who grants them a deserted farmstead of dubious value at a ferry crossing some miles inland from the sea.

Aldred is the prior of a decrepit abbey at Dreng’s Ferry; the derelict townstead dominated by a slovenly and cruel innkeeper who is remotely related to the noble family who rule the district. It is a time when slaves were routinely kept (and abused unconscionably) and the clergy is corrupt, greedy and power-hungry. He dreams of an upright establishment where piety and learning are cherished and nurtured, but his views are the minority opinion. As much as anyone in this benighted place he is respected, but he is without the means to make any substantive changes.

Ragna is the daughter of Norman minor nobility nearing the age of marriage but without much enthusiasm for the process of arranged matrimony. Her family lives in Cherbourg and one day the seas bring a vessel with an English ealdorman named Wilwulf to the harbor with a proposal to her father that he cease sheltering the Viking fleet in return for easing of trade terms. He is tall, commanding, intelligent and bold, and they fall in love in short order. He returns to England, she to her French home disappointed. However, soon a representative arrives with a proposal of marriage. She subsequently journeys to Britain where she is married, installed in what, to her, are primitive conditions, and made pregnant in the time-honored tradition.

What befalls these three during the next decade is the arc of the story. Love, hatred, politics, murder, betrayal triumph and defeat have their place in the tale. It is a rich one, ornamented with fascinating details of period dress, food, manners, and technology that furnish a satisfyingly realistic look at the life of the time. Any reader of historical fiction will find this a rewarding reading experience. Ken Follett remains at the forefront of entertaining historical storytelling.