The Woman They Could Not Silence by Kate Moore

The remarkable and heroic account of a woman’s struggle to gain freedom from the wholly legal, although morally reprehensible constraints placed upon her by her husband and society is enraging, encouraging and inspiring. Everyone should read this book. 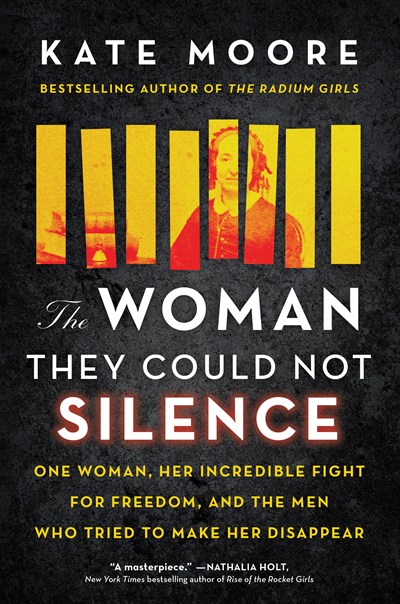 Kate Moore’s first book, Radium Girls, sparked in this reader an outrage and sorrow that is mitigated only by the fact that most of the travesties chronicled in that book have been rectified. The same can be said of this book and its subject, but the fact that these injustices occurred at all is an indictment of historic patriarchy its persistent descendants lingering in our society, to our shame. It is nearly unimaginable that people could have acted in this way, but history is rife with examples of the oppression of women, of which behavior this is the most egregious. As stated, the remnants of this odious practice persist. We see it when politicians declare an outspoken woman who asserts power or opposes some policy or issue as being “crazy”, going so far as to trumpet an epithet including the term. She must be insane, not to acquiesce to the obviously superior intellect and judgment of men.

Elizabeth Packard was a loving wife, attentive mother and pillar of the church when she began to doubt the validity of her husband’s theology. He was a preacher of a particular sect of Christianity that abode no questioning of the “word of God”. As she became more strident about her right to religious divergence, he became angry because he was impotent to rein in her thoughts much less her voicing of them. He decided to have her institutionalized as insane. In Illinois at the time (the 1860s) a woman was not considered in law to be a citizen, in fact she was barely credited with being human. She belonged, body and soul, to her husband. All her possessions, any earnings she may have garnered, her children, even, were his and his alone to dispose of as he wished with no consequences. As such, and with the compliance of the asylum authorities she was duly imprisoned for an indefinite term to the Jacksonville Asylum.

Aided by a legal system that relied solely on the word of the physician in charge, a person could be legally detained for any term, including life. Since psychology could not even be said to have been in its infancy, the opinions of such “doctors” were determined entirely by male attitudes towards women’s minds and bodies. If a woman did not submit to her husband’s every wish and command, she must therefore be unbalanced and in need of treatment. In this atmosphere, Elizabeth was incarcerated and kept until deemed fit to return to her family. Given the abuse suffered at her husband’s hand, her disinclination to return to an untenable situation is entirely understandable, but to those in charge it signaled a failure to return to normalcy. She decided to fight.

With dialogue and comments taken entirely from Elizabeth’s own writings, newspaper accounts of the time, official documents and extensive scholarly examination of works on the subject, the author has presented a moving account of her trials and triumph. Her steadfast determination, courage, persistence and fortitude in the face of repeated setbacks and obstacles placed in her path, including the specter of lifelong detainment with no available legal recourse is at the very least remarkable; at most, heroic.