An intimate look at the final hours of Christ’s life, how he views himself and those who will come after him. Witty, profound and slightly blasphemous, there is still love and respect shown. But mostly, thoughtfulness and intelligence. 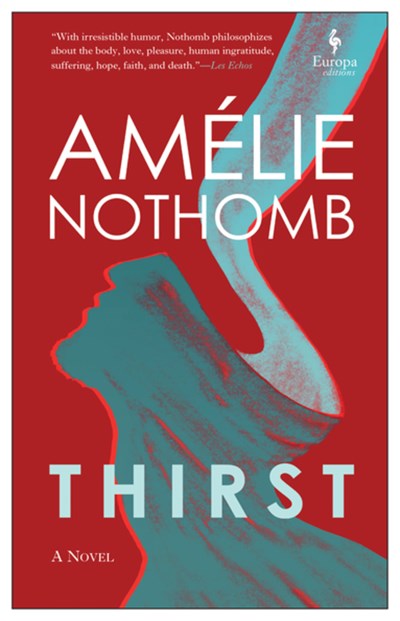 This intimate and visceral evocation of Christ’s last hours is filled with pathos and comedy compounded with the most elemental examination of personal suffering, familial loyalty and society’s motivations. Mention should be made of the translator of this work, Alison Anderson who, in my opinion, should be awarded every accolade available to those who ply her trade. Translations can drag or be obscure, but hers are clear and literate.

This small volume contains a wealth of wisdom, wit and insight. Contemporary issues are to be found, along with matters of faith, belief, forgiveness, ego, and mostly, thirst. That there is no word for the quenching of thirst as there is for hunger is only the beginning of the study of the phenomenon that is the theme of the book. Thirst is not only a physical thing, but it represents so many things in the spiritual realm that it becomes a metaphor. Jesus refers to the “holy trinity” of love, thirst and death as the most important aspects of being worthy of  acknowledgment.

I don’t typically include extensive quotes, but in this case there are several the illuminate the genius of this book, so please indulge me.

Page 35 – …the ineffable instant when the parched man raises a glass of water to his lips: that is God.

Page 83 – …a sizeable proportion of the population … asserting that after death, there is nothing. Such a conviction does not shock me, other than by its peremptory tone and above all the superior intelligence its proponents pride themselves in possessing…  A sentiment of greater intelligence is always the sign of deficiency.

Page 84 – It is a sweet thing to be dead. Coming back to you is rather trying. Just imagine: it’s winter, you’re lying under your duvet in the coziness of rest and warmth. Even if you cherish your friends, do you feel like going out in the cold to tell them so?…

…If you love your dead, trust them enough to love their silence.

Page 87 – Hell does not exist. If the damned exist, it is because there will always be killjoys. We have all met at least one of them: the individual who is constantly frustrated, chronically unsatisfied, the one who, when invited to a splendid feast, will see only the fare that hasn’t been served.

There is grieving here, politics, desire, faith, self-love and self-loathing. It is remarkable that so much to think about is contained in such a small (92 pages) book. The author, who has 28 books in publication writes about a broad spectrum of subjects in many moods. She is notable for the variety and quality of her writing and any reader would do well to introduce themselves to her work. This, however is of a greater magnitude.