News of the World Movie Tie-in by Paulette Jiles

A fine tale of a traveling entertainer who reads newspapers to the citizens of frontier towns returning a kidnapped girl to her family and their adventures. 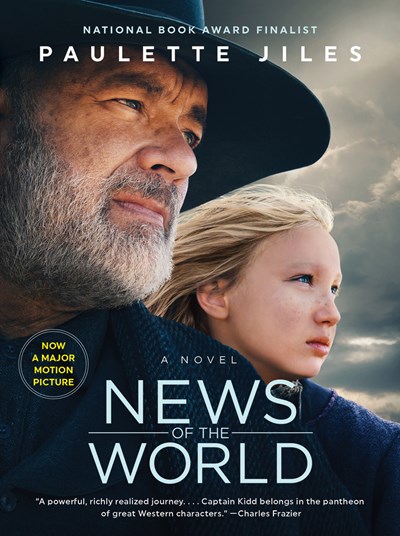 News of the World Movie Tie-in by Paulette Jiles

The harsh sweetness of this book is entirely captivating. It’s the story of an aged warrior, now reduced to traveling the backwaters of the post-Civil War West reading news reports from Eastern and English newspapers to an information-starved populace. His life is immeasurably complicated when he agrees to return a white girl captured by Kiowas to her aunt and uncle some hundreds of miles distant through untamed and dangerous territory. The journey through both perilous wilds and a thorny relationship comprises the tale.

Jefferson Kyle Kidd entered the service of his country in the War of 1812 and kept fighting, on and off through the Civil War first as a messenger and later as an officer. He’s now 71 and the message he now carries is the news of the world to those who have not yet been blessed by telegraph or regular delivery of national newspapers. His readings are well attended and the coins he collects for his efforts allow him to remain fed and lodged and to maintain his horses, his only companions on the road. At one of these events he is approached by several freed black men who are now freighters in the growing West. They have a young girl, 10 years old, taken by the Kiowa when she was 6 after her parents and sister had been murdered. She is now completely Kiowa, wild and uninhibited, violent and undisciplined. Captain Kidd, as he is known, is surely the best person to return her to her family for the fifty dollars these men have been paid to do so, but who now wish to have nothing whatsoever to do with her. He agrees, and is given the gold paid for that return.

What follows has echoes of True Grit and The Seekers but is much more. This story has true heart, emerging slowly from the contentious relationship between the headstrong young girl and her equally adamant temporary guardian. Through bad weather, bad roads, bad men and the inherent difficulties of being unable to communicate in a common tongue, they emerge on the far side of their harrowing crossing of the plains and hills of Texas to an uncertain welcome, but a deep emotional connection.

I recommend this one to everyone. Lovers of adventure, history, stories of family, admirers of human courage and love, readers of well-written prose (and this is very finely crafted work) are included in this invitation. I found it immensely rewarding and downright heartwarming.